As the city manager pointed out we cannot keep spending the way we are because the money is not there.

Along with that we have some money pits that this Council has refused to confront .

So like it or not there will have to be some changes. This means either another big tax increase or more fiscal responsibility.

Research shows there are big reasons Peachtree City is not developing properly. The taxes and other city costs are so high people simply cannot afford to come and/or stay here. We have lost many residents to Coweta County.

When I was a councilman we were hit with the recession. That forced us to deal with spending. Tax increases were not an option because of the burden this would place on the residents.

Another problem was an extended drought. Some will remember when the mowers ran all they did was create dust storms. There were also complaints about our landscapers not working and landscaping on private property.

Peachtree City and Georgia experienced a drought from approximately 2007 to 2010. This led to landscaping struggling, water trucks for highway medians and a lot of bare dirt areas. Once the drought was over everything grew again. This was not a results of the move from outsourcing to in-house landscaping.

To blame climate conditions on prior councils actions is at best disingenuous and deceptive.

Many do not realize that in-house landscaping also includes equipment maintenance and purchasing, health insurance and other benefits. All of which are very expensive. We took appropriate actions in 2008 and 2009 on these issues which saved the city $860,000 a year.

You cannot pave roads and cart paths without money. Both the mayor and council claim it was because of past mismanagement. This is ironic considering Fleisch, Imker and Learnard were on council from 2010 to 2013. They were the majority and their three votes controlled Council. They brought economic development to an end by disbanding our development authority.

All of this is history and is coming to an end. We need to look forward.

We all want a well-maintained city with nice parks and safety. But we are not a resort. We are a city of families. Families deal with budgets as should the city. We have to budget for needs first then look at wants.

Contrary to what some believe lower taxes actually puts more money in the city coffers via sales tax. Economic development puts more money into the city coffers via business property tax and employee consumption. It also reduces traffic. The more people who can get to work by walking or golf cart means fewer cars on the road. It also means lower taxes and retaining more people as residents, including our young people.

Peachtree City leads the nation in the loss of our youth. We are the oldest age demographics in the metro area.

Restore the Development Authority of Peachtree City. Take the $149,000 currently given to the FCDA for which we are getting nothing in return and fund DPAC.

As the city manager pointed out we are not immune to another recession.

He also pointed out the tennis center is underutilized and expensive. Just selling it could put $1 million in the coffers through the sale and elimination of annual spending in the first year. Then several hundred thousands of dollars a year in ongoing years for maintenance.

The Kedron pool is another money pit. The big excuse for keeping it as is is school swimmers. A new bubble costing several hundred thousand dollars was postponed in 2019 due to lack of money. Let the BOE buy it or another alternative.

In 2022 the new Council needs to examine everything through fresh eyes.

The current Council is trying to reinvent Peachtree City. Their problem is more retail and residential is not economic growth. Most residential costs more in services and infrastructure than it provides in taxes.

Retail is dependent on its market, meaning buyers. Just adding more retail only increases competition and reduces the existing businesses profits and viability.

Just look at all the existing empty retail in Fayette County.

The next election is about two years away. So now is a good time for people to realize what is going on and that their future here is on the line.

The current strategy of moving away from the village concept to a high density downtown, redesigning the 74/54 intersection and closing off access to shopping centers and side roads are not fixes. They actually make things worse.

While other cities are moving toward the village concept via new urbanism this Council is moving away from it.

Continued apathy and lack of vision will lead us further down the rabbit hole.
Last edited: Jan 21, 2021 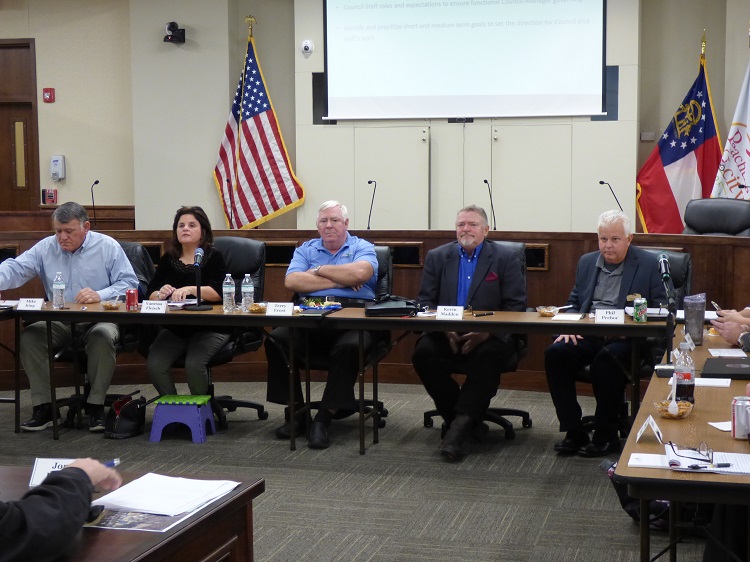 Brainstorming the future of Peachtree City - The Citizen

Council may decide on list of priorities beginning Dec. 12 — A lengthy Dec. 3 meeting of the Peachtree City Council to identify and prioritize short- and medium-term goals for …
thecitizen.com

Add a hydroelectric generator to the spillway and sell the power generated to Georgia Power.

Staff member
I was a councilman and mayor under Obama. The mandates, regulations and paperwork were a nightmare. We had to hire an administrative assistant just to keep up with all the federal filings. Low-cost housing mandates and work processing for illegal aliens was not what Peachtree city was about. We also had the drought years which were not beneficial.

As you read above I warned Fleisch and the other tax and spenders that contrary to their beliefs Peachtree City would have more problems in the future. And here we are again with Covid, declining tax revenues and spending the city reserves. Spending money in areas that, as the city manager said, are money pits. And looking at years of struggles ahead of us.

Next council must reverse acts of current council - The Citizen

Some history. Fleisch, Imker and Learnard slowly chipped away at DPAC until they dissolved it. Thus no economic development for over 10 years. Next Council seized control of WASA and …
thecitizen.com